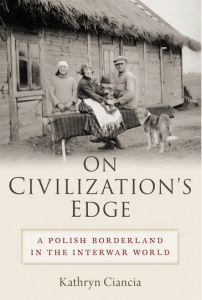 Kathryn Ciancia’s recent book, On Civilization’s Edge: A Polish Borderland in the Interwar World (Oxford University Press, 2020), traces how an army of Polish civilizers, from border guards to urban planners, attempted to transform a backward, multiethnic borderland into a useful tool for post-imperial state-building projects. By listening closely to voices from within and beyond the borderland, she shows how these actors mobilized politically expedient stories as part of their vociferous competition over what it meant to belong to the Polish nation (and, by proxy, the civilized world). In this talk, she will explore how historicizing the stories told by our actors can allow us to construct new narratives about what borderlands mean for local, national, and global histories.

The book offers an innovative, deeply researched and engagingly written example of how contemporary European history can be re-thought by starting at the local level, with second-tier actors in nationally uncertain borderlands. In the course of recounting the civilising mission on which these women and men embarked, Professor Ciancia’s book reminds us that civilisation – like modernity – was not a one-size-fits-all concept nor a morally superior way of being. Rather, notions of modernity and civilization were (and remain) tools of political mobilization.

In recounting her tale of « civilizing by Polonizing » in the formerly Russian imperial backwater that now stretched inside the new Polish state’s eastern frontier, Professor Ciancia invites us to consider how fears of national weakness and competition for local power affect the treatment of national minorities, how more inclusive definitions of the nation are themselves based on exclusions, and how blurry the distinction between empires and nation-states can be.

Kathryn Ciancia obtained her PhD from Stanford University. She is currently an associate professor at the Department of History at the University of Wisconsin-Madison. Her research and teaching interests include modern Europe and eastern Europe, Poland, mass violence, nationalism and transnationalism, citizenship and migration, and the Second World War. She has now begun work on a new transnational history that traces the relationships between the Polish interwar state and its citizens abroad, with a particular focus on the institutional role of consulates across the globe.