Fascism as an Anti-Habsburg Revolution. Crisis of the Rule of Law, Social Unrest and Political Conflict in post-Habsburg Upper Adriatic (1918-1926) 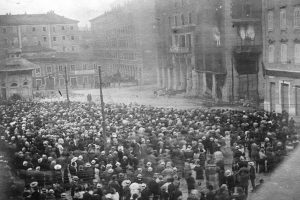 In the framework of the SOCIOBORD project, this lecture intends to focus on the aftershocks of the Great War and collapse of Austria-Hungary in a post-Habsburg borderland like the Upper Adriatic. Notably, a close investigation of the local dynamics between State and civil society will allow to shed new light on the multiple cycles of conflicts and crises and the subsequent socio-political reconfigurations between 1918 and 1926.

The national/nationalist scholarship has usually described the history of this complex transition from the Habsburg Empire to the Italian State from a top-down perspective, mostly in terms of imposition of the national centre (Rome) on a new periphery (Trieste and Istria) occupied in 1918 and formally annexed in 1920. This lecture will instead adopt a dynamic bottom-up approach, in order to show in which sense and to what extent the problems of the transition in post-Habsburg Upper Adriatic crucially challenged the stability of the new Italian authorities and provoked a borderland situation of permanent uncertainty. This approach will also allow to shift the focus from the obvious connections between Italian nationalism/irredentism and fascism to a local, transitional context still deeply shaped by Habsburg practices and cultures, as well as by multiple loyalties and identities and their contingent transformations. In this regard, not only the disrupting, conflicting relations between the nationalizing Italian State and the local society will be considered as mutually dependent, but different, persistent forms of localism, and their intertwining with both socialist and fascist radicalism, will be analysed as drivers of further, increasingly violent change.

This approach is expected to provide a new understanding of the Upper Adriatic fascism as a kind of anti-Habsburg revolution aiming to eradicate the Austrian model of multinational State, based on the rule of law and on a vibrant, plural civil society, by reframing the local forces of Italian nationalism and creating a new, authoritarian order.

Marco Bresciani is Associate Professor at the Department of Political and Social Sciences of the University of Florence. He received his PhD in Contemporary History at the University of Pisa (2006), where he was a post-doc researcher from 2010 to 2014. He was also a fellow at the Scuola Normale Superiore (Pisa), at the Remarque Institute (New York University), at the Centre de Recherches Politiques R. Aron (Ecole Hautes Etudes en Sciences Sociales), at the Center for Advanced Studies (Rijeka), at the University of Zagreb, at the University of Verona. His main research field was the political and intellectual of Italian and European antifascism and anti-totalitarianism. He has published several contributions on these topics, and among them a work on the antifascist revolutionary group of Giustizia e Libertà (Carocci, Roma 2017). Meanwhile, he has turned to the political and social history of fascism, nationalism and conservatism in interwar Europe, with a special focus on the post-Habsburg Upper Adriatic. He has recently published an edited volumed on Conservatives and Right Radicals in interwar Europe (Routledge, London 2021), then translated into Italian as Le destre in Europa. Conservatori e radicali tra le due guerre (Carocci, Roma 2021).