Postwar „normalization”: the reintegration of disabled veterans to Civilian Life in Interwar Lviv 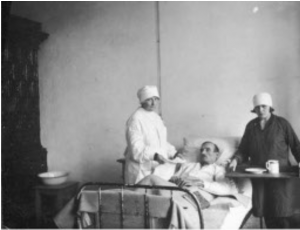 Dr Oksana Vynnyk examines the relationship between disabled veterans and the state. She focuses particularly on how the imperial legacies of the First World War shaped the destinies of disabled veterans, and the ways in which their ethnicity influenced their post-war political and social lives. Poland’s imperial past and the series of borderland conflicts after the Great War, as well as the Soviet-Polish War of 1919-21, resulted in the co-existence in postwar independent Poland of different groups of veterans that had belonged to numerous, sometimes conflicting, armies. The presentation focuses on Lviv as a case study to examine the adaptation of disabled veterans to civilian life. Characterized by its heterogeneous population, this borderland city serves as an ideal site for the study of interethnic relations in the Second Polish Republic. The focus on Lviv not only reveals how disabled veterans re-adapted to “normal” life in a time of severe national and social conflict, but also brings the numerous “disability” discourses created by the emerging welfare state, society, and disabled veterans into high relief. Dr Vynnyk will explore the interconnections between legislative norms, bureaucratic policies, and informal practices as the key elements in shaping the experience of war disability in interwar Lviv.

Oksana Vynnyk holds a PhD in History from the University of Alberta, Edmonton. Between September 2015 and May 2018 Oksana worked as an editorial assistant at Canadian Slavonic Papers, the journal of the Canadian Association of Slavists and in 2020 she was a Visiting Assistant Professor of History at Columbia University. Currently, she is a research associate at the Holodomor Research and Education Consortium (Canadian Institute of Ukrainian Studies, University of Alberta) in Edmonton and works on the project that focuses on medical personnel and medical practices during the famine in Soviet Ukraine in 1932-1933.